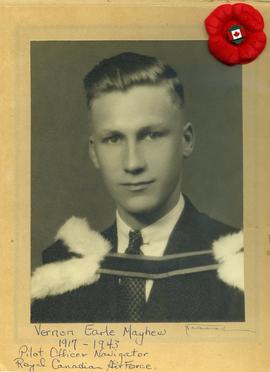 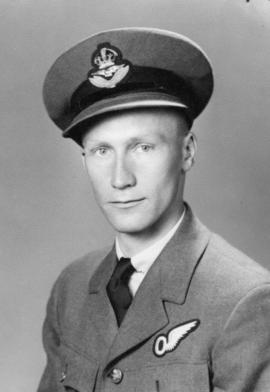 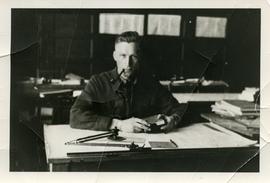 Vernon was born February 2nd, 1917 in Lennoxville, Quebec, Canada. He was the third and youngest child of Horace Frederick Mayhew and Sarah Pearl Johnson. His siblings were Evelyn Johnson Gustin and Malcolm Bernard. He attended Lennoxville High School, Quebec, and went on to Bishop's University receiving numerous awards and academic achievements, receiving his B.A. (Mathematics and Physics Honours, with distinction) in 1936. During World War II, he was a pilot and navigator in the Royal Canadian Air Force. He was killed in action at the age of twenty-six during the war's "Battle of the Atlantic" in June of 1943, somewhere over the Atlantic Ocean near Newfoundland. His body was never recovered. A monument was erected in Mount Forest Cemetery in Coaticook, Quebec. His family received the Silver Cross in his name posthumously.

NB: Mention of the Silver Cross in newspapers articles indicate that "these medals are presently at Bishop's University" The Governor Generals' medals were donated to Bishop's, but not the Silver Cross. In one of the photograph inscriptions, there is a reference the Silver Cross is displayed posthumously at "the Legion".