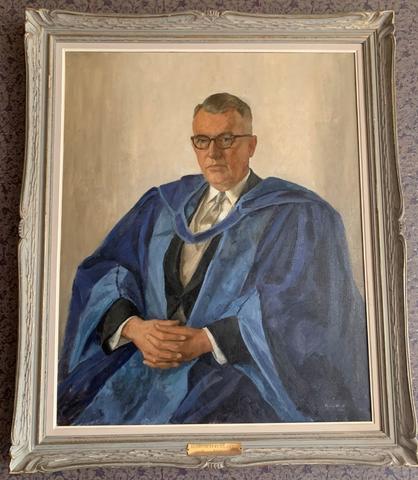 Renowned as a talented portrait painter, Robin Watt ( Henry Robertson) was born in Victoria, British Columbia and studied at the Royal Military Academy in Sandhurst, England. During World War I, he served as an officer with the Green Howard Regiment, was wounded in battle and decorated with the Military Cross, and the Croix de Guerre. After the war, he studied for three years at the Slade School of Art, London, with Henry Tonks, Walter Russell, and William Steer; at the St. Martin's School of Art and at the Central School of Art where he learned etching under W.P. Robins. Later, he continued his studies at the Académie Colorossi in Paris and the British School of Art in Rome. An admirer of Augustus John and Edgar Dégas, he worked in oil, watercolour and charcoal, favouring a realist approach, producing portraits, still lifes, and in his later years abstract works.
By the late 1920s, he returned to Canada and settled in Montréal. Around 1932, he returned to England, where he worked for an unknown period with his wife Dodie Watt, as an art teacher in a boy's school. Upon his return to Canada in 1949, he was immediately recognized as a fine portraitist and in the same year, invited to paint the portrait of Earl Wavell, Colonel of The Black Watch (Royal Highland Regiment) on the occasion of his visit to Canada. In 1951, the Montréal Museum of Fine Arts held a solo exhibition of Watt's portraits and still lifes that art critic Robert Ayre recommended they call "Faces and Flowers".
He died in 1964.