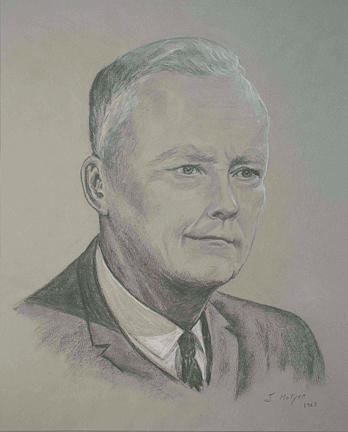 Janet Marian Speid-Motyer was born on 19 January , 1919, in Lennoxville, Québec to Arthur and Helen (nee Sievwright) Speid. Janet attended Bishop's University where she studied business, philosophy, and history, obtaining a BA in 1939. She was also actively involved at Bishop's, working on committees, playing on sports teams, and acting in major roles in theatre productions. She worked for the naval attaché of the Australian Embassy in Washington, D.C, during WWII. After the war, she traveled extensively and worked in Bermuda. She returned to Lennoxville where she worked as secretary to the principal at Bishop's University. Janet was also an accomplished artist. She studied with Canadian artists Arthur Lismer (1885-1969) and Fred Ross (1927-2014) and at the Montréal Museum of Fine Arts, at the Abbott School in Washington, D.C., the Beaux-Arts in Sherbrooke. Janet married Arthur Motyer in 1955 and they had two children; Dr. Michael Motyer and Gillian Allan (Motyer). Janet died on 14 July 2012.