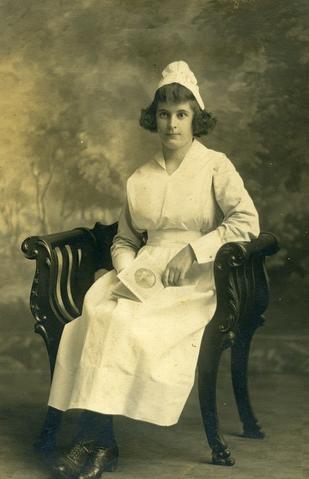 Bessie Jane Banfill was born on 18 January 1899 on the family farm outside Richmond. Her parents were Enos Leroy Banfill and Sarah Augusta Healy. After some secretarial training, she obtained a position in the office of an asbestos mine near Thetford Mines and secured enough money to support her studies at the Sherbrooke Protestant Hospital, where she graduated in June 1923. Ms. Banfill traveled to Mutton Bay (Labrador) in 1928 and took a missionary training course at the United Church Training School in Toronto. After travelling to the Magdalene Islands, she opened the new W.M.S. Hospital at Smeaton, Saskatchewan in 1933 and was awarded the a medal from King George V in 1935. She went to the Indian Residential School at Ahousaht in 1937 and went back to the Labrador Mission in 1942-1944. After receiving a back injury that prevented her from doing full-time work, she did part-time duty at Cornwall General Hospital and later in Ottawa. Bessie Banfill wrote books and articles on her nursing experience. This includes titles such as "Labrador Nurse" (1952), "Nurse of the Islands" (1965) and "Pioneer Nurse" (1967). She died on November 13, 1975. Her body was given to Queen's University Medical School. She had never married.

The fonds contains primary source material on the life of Bessie Jane Banfill from 1923 to 1998. It consists of articles, biographical notes, a leaflet of her graduation ceremony and photographs. It is comprised of the following files: Biography (1923-1998), Photographs and Postcards (1924-[1975?]).

The fonds was donated by Doris Banfill in 2012.

Title based on contents of fonds.
The documents are in English.