The fonds contains primary source information on the family life; social, religious and economic activities; and education of various members of the Douglas family, Bridgette family, and other relatives during the 19th and 20th centuries. It also contains historical information on the Farnham area, as well as genealogy. The majority of the records were produced in the Eastern Townships, many come from the New England states as well as across Canada and worldwide. It consists primarily of personal and business correspondence, postcards and photographs, historical notes and family history. The fonds is comprised of the following series: Douglas family (1812-1984), Pearson family (1868-1941), Todd family, (1863-[197-?]), Bridgette family (1850-1983), Kirkpatrick family (1850-1957), Genealogy (1969-2006), and Miscellaneous Documents (1876-18-?).

The fonds contains primary source information on the theatre productions of the Brae Manor Players in Knowlton and North Hatley from 1939 to 1955. If consists of programmes.

The file contains primary source information on the members and activities of the Mount Sutton Chapter No. 12, Royal Arch Masons in 1994. It consists of a list of officers and an invitation and agenda for a regular convocation of the chapter. 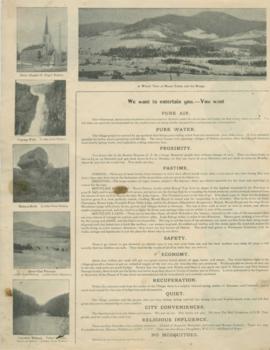 The file contains primary source material on tourism in the Sutton area from the early 1900s. It consists of an advertisement outlining the attractions Sutton can offer to tourists. The advertisement includes images of the surrounding landscape and includes Grace Anglican Church in Sutton, Legrage Falls, Balance Rock, the Pinnacle, Sutton Methodist Church, the Canadian Mohonk, and Billing's cascade. 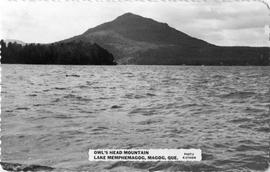 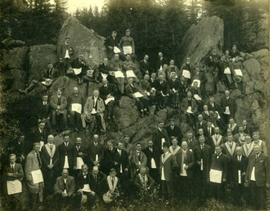 Meeting of Freemasons on Owl's Head

The Golden Rule Lodge of Stanstead holds a ceremony every year at the top of Owl's Head. 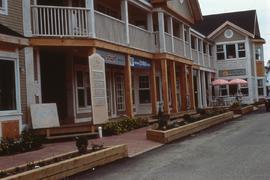 Item is a slide of the tourist information office located in Sutton.