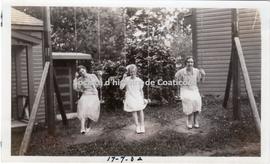 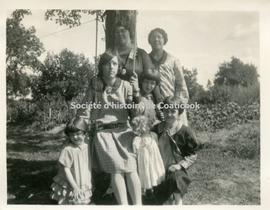 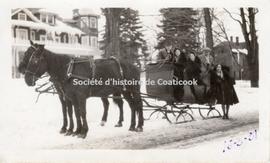 Napoléon Drolet, born in 1842, and married Adéline Rochette in Québec in 1864. They settled in Compton, where their twelve children were born: Thomas, Eugenie, Oliva, Emile, Marie Alma, Victor, Blanche, Adelina, Marie Louise, Léon C., Ernest, and Léontine. In 1909, the family relocated to Coaticook. Ernest studied at Université de Montréal, receiving his BA in pharmacology. He opened his practice in Coaticook, in the building known as “Medicine Hall.” Ernest Drolet married Émilie Fortin in 1909 in Cookshire and together they had one child: Antoinette (1910-1999). Antoinette married Ernest Délium Émond in 1945 in Montréal.
Joseph Alexandre Fortin (1846-1920) married Marie Joséphine Tremblay (1854-1928) in Roberval in 1872. At some point the couple moved to area of La Patrie, where some of their children were born. Together they had eight children: Adélard, Joseph Darly, Alfred, Émilie, Joseph François-Xavier, Arthur, Laura, and Alice. Xavier (1884-1976) married Blanche Roy (1895-1999). Émilie (1882-1963) married Ernest Casimir Drolet (1883-1919).
Lucien Roy married Ferdinanda Côté, probably in the area of Saint-Anaclet-de-Lessard in Rimouski. Among their children was Blanche Marie Fernanda Roy, born in 1895. Blanche married Xavier Joseph Fortin in Drummondville in 1919.

Collection donated by Hélène Fortin on behalf of Jacques Fortin in 2015.

The collection is arranged by type of photograph: cabinet cards, ferrotypes, and snapshots.

An idenfication key is available for some of the photographs.