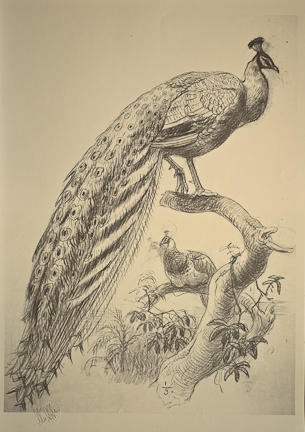 Josef Wolf was born in the Eifel, Germany, on 22 January 1820 on a farm in Mörz in Münstermaifeld. As a child he was known for his artistic talent. After finishing school in Metternich he was trained in Koblenz from 1836 to 1839 as a lithographer.

Through the mediation of the Frankfurter explorer Eduard Rüppel (1794-1884) in 1840 he came into contact with Johann Jacob Kaup (1803-1873) at the Grand Ducal natural history collection in Darmstadt. He promoted the extraordinary talent of the young artist and recommended him to his colleagues Hermann Schlegel (1804-1884) in Leiden and John Gould (1804-1881) in London as an illustrator.

From 1848 onward Wolf lived and worked in London, where he quickly became the most important animal painter of the 19th century.