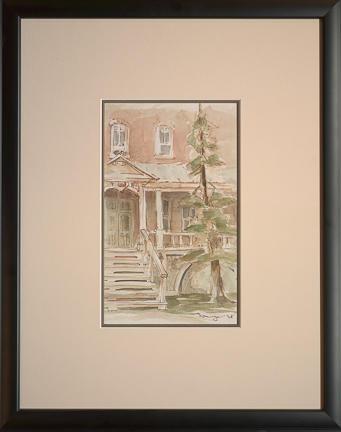 David Morgan was born in Montréal, Québec in 1943. In the early 1960s, David graduated from the Montréal Museum of School of Art and Design where he studied painting under Arthur Lismer (1885-1969). He was awarded a one-year scholarship to study etching and engraving techniques with printmaker Moe Reinblatt (1917-1979). In 1982, David graduated from Bishop’s University with a B.A. Honours in Political Science. In 1994, he graduated from McGill University where he completed a Master’s Degree in Religious Studies. His McGill Master’s thesis was entitled "The Origin and Use of Compositional Geometry in Christian Painting".
Throughout forty years, David taught Art and Art History at a variety of academic levels. He was an instructor of drawing, painting, design and printmaking at the Montréal Museum School of Art and Design; at Bishop’s College School he was the Art Master for seven years. Over the course of twenty-two years, Morgan taught Art History and Criticism as well as studio courses at Champlain College in Lennoxville; he also lectured in Art History at Bishop’s University.
From 1986 to 1990, Morgan developed and operated the David Morgan Art Gallery in Lennoxville, where he show cased works of contemporary, as well as late 19th and early 20th century art. When Morgan retired from teaching at Champlain College in 1997, he concentrated on his own painting and his ongoing work as a board member of the Elizabeth Greenshields Foundation, which is dedicated to helping artists from around the world in their formative years.
David's work may be found in collections such as the Bronfman Collection of the Montréal Museum of Fine Arts, The Royal Bank of Canada Head Office at Place Ville Marie, Bishop’s University, Bishop’s College School, and several private collections in Canada and Europe.
David Morgan died in Kingston Ontario in 2011.