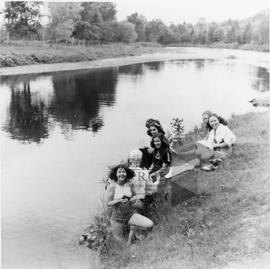 The St. Francis District, created in 1973, is the first of three subdivisions of the Girl Guides of Canada's Sherbrooke Division formed during the Division's reorganization in the early 1970s. It first comprised companies in the Lennoxville, Waterville, Hatley, and North Hatley areas, but two years later the Hatley companies were transferred to the newly formed Dufferin District. The District Commissioner is accountable to the Division for the District's good management and the development of the companies, in light of the By-laws of the national organization, which stipulate that the main objectives of all its sections are to enable girls 'to develop personal values and respect for self and others; to develop respect for nature and the order of things; to have new experiences and outdoor adventure; to make friends and have fun; to achieve a sense of well-being; to learn the importance of decision making; to function in small groups; to achieve a sense of pride in accomplishment; to acquire practical and leadership skills; to develop their ability and willingness to help'. The District Commissioner works with a committee consisting of herself, the Deputy Commissioner, the Secretary, the Treasurer, the Badge Secretary, a representative of the Local Association, the District Guider, the Guiders of the District, and optionally, community representatives. This committee meets regularly to look after the District's organizational needs.

The documents in this fonds were previously kept in the Girl Guides of Canada, Sherbrooke Division fonds (P052) but were removed to respect archival principles.

The fonds contains source material on the preparation and carrying out of activities organized by Lennoxville companies. It consists of minutes, activity reports, and membership lists for the District and for the Waterville and North Hatley companies. It is comprised of the following series: General Meeting (1976-1977), Committees (1973-1979), Membership Lists (1977-1987), Local Associations and Groups (1938-1988), and Press Clippings (1973-1987).

Researchers may also consult the Musée d<histoire de Sherbrooke for archival holdings on the Scouting and Guiding movements in the Eastern Townships.

Previously known as The Sherbrooke Girl Guides Papers.
Title based on contents of fonds.
Among the photographs, there are 33 negatives.
The documents were donated in two accessions (1984 and 1993) by Edith Warner, former Commissioner of the Newton District.
The documents are in English.