The fonds consists of primary and secondary source documents relating to Norman Edson. The textual records include many secondary source documents relating to the career of Norman Edson. The photographs are the most important documents in the fonds as they are original reproductions printed by the artist and given to different clients and friends. Some of the photographs are originals that he colorized and framed. He also wrote the title on the back of the pictures.

The fonds consists of primary and secondary source documents about Nina May Pickel, married to Owen Ernest Owens. The textual records contains personal and family documents but also documents about her professional career as a painter. The photographs include family portraits, some of them being ambrotype and tintype, and postcards.

The file contains photographs of four generations of people related to the Cooper family. The photographs were collected by Marguerite Cooper Chappell who did a thorough genealogical research, partially focusing on the "mothers" in the family line.

Photograph of Stanley F. Cooper, son of Wilfred Gerald Cooper and Lorina Campbell. He is seated on a leather chair.

Photograph of Nellie Dora Cooper, daughter of Forrest Cooper and Dora St-Martin, married to Wilmoore Kendall. She is standing beside and old portrait of a lady.

Photograph of Marguerite Cooper Chappel and her brother Leonard Cooper. They are seated on a patio and Leonard is holding a dog.

Photograph of Roy Benson, son of Arthur Benson and Grace Cooper, with his wife Mildred Ewing. They are seated on a ferry boat.

Photograph of Wilfred Angus Cooper, seated on an exterior chair. He is seen from his right side, not looking at the camera.

May and Grace Cooper

The Cooper Sisters with Marguerite Chappell

Photograph of the Cooper sisters Eva, May, Alta and Grace, seated on a couch, with Marguerite [Cooper] Chappell, seated on the floor beside them.

Photograph of Louise Cooper, married to [?] Nickulak, seated on a rocking, with her four sons and two grandchildren around her.

Photograph of Barbara and Robert Chappell, grandchildren of Forrest E. Cooper and Dora St-Martin. They probably are the children of George Arthur Chappell and Marguerite Cooper.

Gerald Cooper and his wife Clara

Photograph of Gerald Cooper and his second wife Clara McDonald. The couple seems to be celebrating an anniversary as they are wearing a corsage. Gerald is sitting while Clara is standing behind him, with her hand on his shoulder.

Photograph of Louise Cooper, married with Robert Little, sitting on an exterior staircase, holding a puppy. On the back, there is an inscription: "Dina has grown so since this was taken that I can hardly hold her. Sept. 1950.".

Photograph of some of the Cooper siblings, standing in a yard in front of apple trees. From left to right: Mae Cooper Scott, Grace Cooper Benson, Forrest Cooper and his wife Dora St-Martin.

Photograph of four generations of the Cooper family, standing in front of a house. From left to right: Marguerite Cooper, her son Robert Chappell, her father Forrest Cooper and her grandmother Nellie Evalina [Fuller] Cooper.

Photograph of Eva Cooper's five children, standing in front of a car. The oldest daughter is holding a baby and the children are dressed with winter coats and boots as there is snow on the ground.

Photograph of William Edwin Cooper, standing on the grass with a nice looking cow beside him.

Photograph of Manley Nelson Fuller, aged 87, standing beside Grace Benson Mills, aged around 3 years old. They are standing outside with the young child wearing a coat, a hat and holding a doll. There is an inscription on back: "[This] is a picture of grandpa [and] Grace taken just a few months before he died. I think it a very good picture of him. His is [standing] [...] the baby to look at something."

Photograph of Mary Elizabeth Ives, married to Manley Nelson Fuller, standing behind a table with a large book on it. Behind her, there are cushions against the wall and up on the wall, there is a portrait of a young woman.

The series consists of photographs of the Cooper family, particularly William Edwin Cooper and Nellie Fuller family and descendants.

The fonds consists of primary and secondary source documents relating to the Cooper family, particularly the descendants of William Brill Cooper and Sarah Jane Davis who were born in Bolton.

The series consists of secondary source documents relating to the Cooper family, particularly the William Brill Cooper and Sarah Jane Davis descendants, who lived in Bolton. It includes family charts, obituaries and genealogical information, and a letter from Marguerite Chappell about her genealogical research. 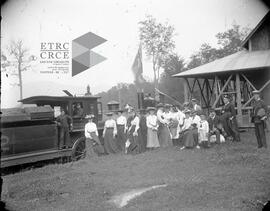 The file consists of glass negatives showcasing Blarney Castle and the surrounding grounds, home of Senator George G. Foster, located on the east bank of Brome Lake, between Judge Christopher Dunkin's and Sydney Fisher's estates. The images show Senator Foster with his wife Mary Maud Buchanan, their children George Buchanan and Ruth Elizabeth, and some guests. 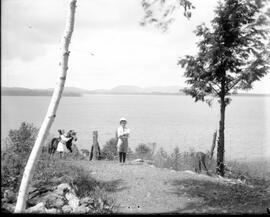 Glass negative of the two children of Sen. George G. Foster as well as their pony, with a view of Brome Lake in the background. The little boy has his arms crossed. 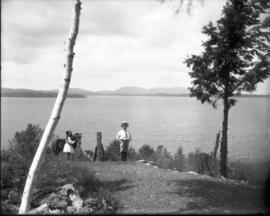 Glass negative of the two children of Sen. George G. Foster as well as their pony, with a view of Brome Lake in the background. The little boy has his hands in his pockets.