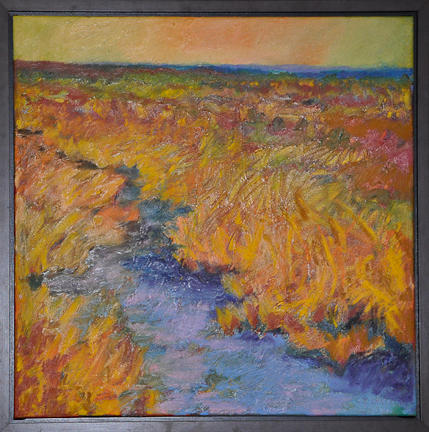 Catherine Bates is a Canadian artist working in Montréal and Georgeville, Québec. Originally from Windsor, Ontario, she obtained her degree in Art and Archeology from Victoria College, University of Toronto. After further painting and printmaking studies in the United States and England, she completed her Master of Education at McGill University.
She was a professor in the Fine Arts Department of Dawson College until 2002, and wrote as art critic for the Montréal Star newspaper and several periodical magazines such as "Canadian Art" and "Art News". Her book of poetry , "Counterpane: Poems and Drawings", was published by Ken Hertz. She was elected member of the Royal Canadian Academy in 2001.

As well as studio work, Bates also travelled extensively as "plein air" painter in the United States, Ontario's Georgian Bay and very widely in her adopted home of Québec, particualary the Charlevoix and Gaspé regions. She was awarded several residencies at Taos and at Arroyo Seco, New Mexico, and at Pouch Cove, Newfoundland, and made two trips to the Arctic to paint. She taught at the American School in Switzerland in the summer of 2001. References to the environment are frequent and are most evident in the symbolism of her "Icarus" series.

The region of Lake Memphremagog has long been a favourite area and has led to inspiraiton from the local landscape, especially Owl's Head Mountain. She loves to paint still lifes as well, often combining them with landscape.