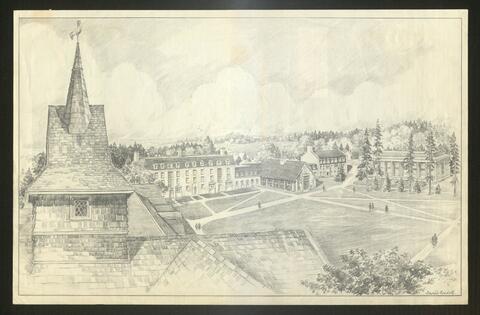 Mr. Goodall was born in England in 1909. He trained under Marcus Holmes, (1875-1951) of the late Herkomer School in London. Once settled in Canada he spent many years sketching and painting British Columbia and the Canadian Rockies. For a number of years he was Canadian Artist of the Royal Canadian Navy, C.P. Rail and the Canadian Stevedoring Company of Vancouver. The three original sketches Mr. Edward Goodall did of Bishop's University were published in "The Illustrated London News" January 12, 1963. He died in 1982.