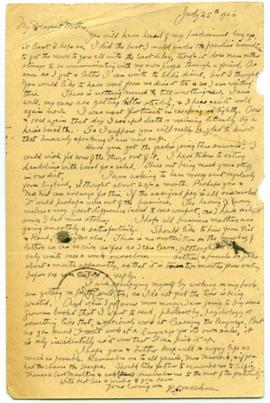 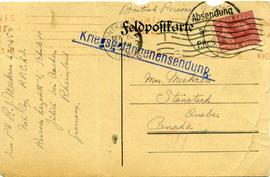 Robert James Meekren was born on 25 June 1876 in Lambeth, London, England, the son of Robert Charles Meekren and Eliza Alice nee Carter. The family immigrated to Canada when he was fifteen and settled at Stanstead, Quebec, Canada. Described as a textile manager and a widower, he served for three years as a sub-district intelligence officer in the Corps of Guides. He studied for a London School of Theology degree in Divinity at Bishop’s University, Lennoxville, Quebec, Canada, before returning to England to study engineering. He returned to Canada and married Alice Lydia Meigs in 1901, who died in 1907. In 1915, he enlisted in the 117th (Eastern Townships) Battalion of the Canadian Expeditionary Force. After he signed up in 1915, he served originally in the overseas unit, 4th University Company and then joined Princess Patricia's Canadian Light Infantry in the field during the Ypres Salient on 14 May 1916. He was taken prisoner of war on 2 June 1916 after he was buried during an enemy bombardment and received severe back injuries. After his discharge from German hospitals, he was held at Stendal, Saxony-Anhalt, Germany. He was repatriated to England on 11 January 1919, spending time in military hospitals until he discharged himself in September 1919. He was initiated as a Craft freemason in Golden Rule Lodge, No. 5, Stanstead, Quebec in 1911, serving as Worshipful Master in 1922. He was appointed Senior Grand Deacon, Grand Lodge of Quebec in 1942. In 1914 he visited England and studied many texts at the Library of Grand Lodge, Freemasons' Hall, London and at the British Museum. In 1914 he was exalted as a Royal Arch freemason in Lively Stone Chapter, Stanstead, Quebec, where he served as First Principal in 1922. He was one of the original members of the Philalethes Society, founded in 1928 and was a member of the Society of Blue Friars. He joined the Ancient and Accepted Rite in Lodge of Perfection, Newport, Vermont. He was editor of The Builder, the journal of the National Masonic Research Association, from 1925 to 1930. He returned to Stanstead, Quebec, Canada after The Builder collapsed in 1930. He joined the Correspondence Circle of Quatuor Coronati Lodge, No. 2076, London in 1922. He joined Quatuor Coronati Lodge, No. 2076, London as a full member in 1948. He visited England in 1922 in order to meet many scholars of freemasonry. He wrote extensively on various aspects of freemasonry. He underwent extensive surgery in 1960 from which he never fully recovered and spent much of his remaining life in hospital. He served as Mayor and Engineer of Stanstead, Quebec from 1934 to 1946. He died on 5 December 1963 aged 87 and was buried at Crystal Lake Cemetery, Stanstead, Quebec, Canada.

The file contains a postcard written in July 25, 1916 in Rhineland (Germany) by R. J. Meekren, a Canadian soldier, to his mother in Stanstead.

The postcard is also available in digital format.

Researchers may also be interested in R.J. Meekren's recollections of personal experiences as a prisoner of war, which are held by the Museum of Freemasonry in London, UK (https://museumfreemasonry.org.uk/catalogue): GBR 1991 MSS 97/1/1

The document is in English.