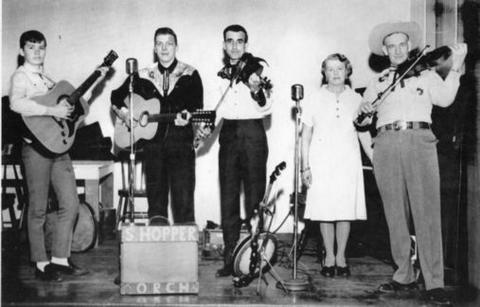 Sam Hopper was born on 15 February 1899 in Wilson's Mills. In 1921, he moved to Huntingville where he and his brother, Earl, bought a farm, also working at Veneer factory in Waterville. Sam married Aveline Sarrasin (1904-1986) the 8 June 1927. In the 1940s, he and his wife moved to Waterville. He then ran a sawmill in Waterville.

As a child, Sam Hopper learned to play the fiddle and began to play at parties at age 12. In 1945, he began to participate in amateur shows with Norman Masters. Soon after, they formed a band with Sam Hopper's wife, Albert Nutbrown and Stuart Deacon. For about 30 years, the group played at marriages and dances in the Eastern Townships and were on the radio for 25 years.

The recordings were created through a project undertaken by Janet Bentzen in 1982, funded by the Townshippers' Association, to re-record the tapes owned by Aveline Hopper. The recordings were donated to the Bishop's University Library and later transferred to the ETRC.

Title based on contents of fonds.
The documents were donated between 2001 and 2004 by Bishop's University Library.
The fonds has not been processed.