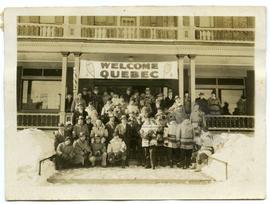 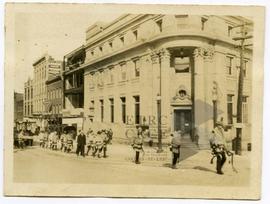 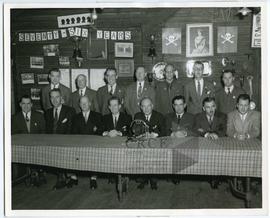 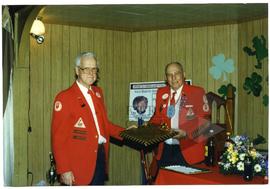 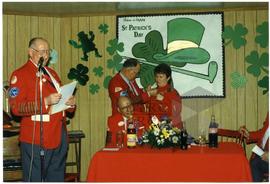 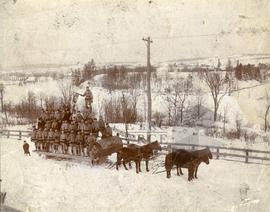 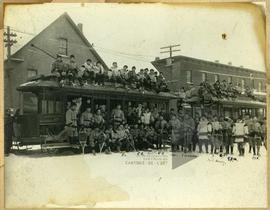 The Sherbrooke Snow Shoe Club was founded in Sherbrooke on 1 December 1877 and incorporated in 1894. Its immediate purpose was to provide an activity with fellowship to keep the men of Sherbrooke active during the winter months. In the original constitution a uniform was listed as: a red tuque with a blue tassel, a white blanket coat with scarlet accents, white knickerboxers with scarlet accents, and scarlet stockings. In 1883, the colors quietly changed to fawn and scarlet with the Club coat being the main item. On tramps, each member would be required to wear this garb.

The Club started with only 36 members; by 1890 there were 110 members and in 1913 a motion was passed to allow the limit of 150 members. In 1953, that number was again changed to 170 members, then in the 1970s the number reverted to 150. Members had to pay membership dues annually, which could increase according to their status in the Club.

Sherbrooke was a town of 8,000 mostly English people in 1877. Even as Sherbrooke became more French in the 1950s onward, the Club remained English.

For the first ten years members met at the Magog House. In 1887, the Club bought three acres of land from a local farmer and on 10 February 1888 the new official clubhouse opened and was located on Jacques Cartier Street (now Orford Street). From 1888 to 1944, the Club continually bought up more land and expanded the clubhouse. In the late 1970s, the clubhouse underwent a massive renovation and became what it is today.

The meetings were on Friday evenings at 8 p.m. sharp for tramps which were usually a few miles long in length. The first tramp was on 11 January 1878, which was a success. After the tramp, the members would meet afterwards around 10 p.m. at the Magog House for a hearty supper within which they would sing, tell stories and exchange fellowship. By the 1920s the Club was organizing many other activities besides tramps such as: Initation Night, President`s Reception, Red Party Night, Services Night, and Parsons Night. The meeting format was changed to Wednesdays by the 1890s, and in the 1959-60 season the format changed to gathering at 6:30 p.m. sharp for supper, followed by a short meeting, then fun and games in an activity like those listed above. These activities became annual events and the Club rarely tramped after that. Members also participated in competitions in other parts of Canada--mainly Ontario and Quebec though--for the early years.

The Sherbrooke Snow Shoe Club is proud to claim that they are the oldest still-running snow shoe club in the world.

The fonds contains source material on the constitution, administration, events, activities and membership of the Sherbrooke Snow Shoe Club from 1877 to 2004. It consists of constitution, by-laws, minutes, financial and accounting records, correspondence, membership records, news clippings, programs, songs and poems. Most of the material mentioned above is contained in the minute books for the first 84 years. The fonds is comprised of the following series: Administration (1877-2004), Events and Activities (1893-2004), Membership (1877-1969), and Miscellaneous Documents (1879-1994), Artefacts (1913-1993), Photographs ([188-?]-1996).

The documents were donated in 2004 and in 2007 by the Sherbrooke Snow Shoe Club. Additional material was donated by Wayne Clowery in 2019.

Most of the documents are in English, some are in French.

The following finding aid is available: The Catalogue to the Sherbrooke Snow Shoe Club fonds (P150), Prepared by Julia Barkhouse under the Supervision of Sophie Morel, April 2005.

Title based on contents of fonds.