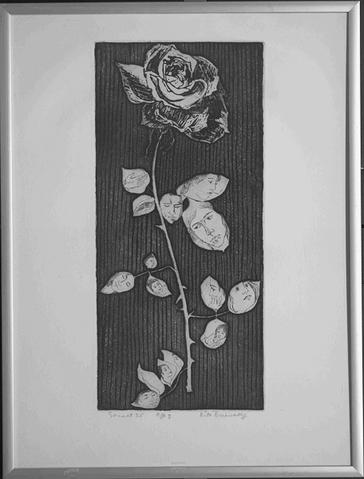 Rita Briansky, painter, printmaker-etcher and teacher, was born in 1925 in Grajewo, Poland. Together with her mother and two sisters, Bella and Becky, the family moved to Ansonville, Ontario in 1929. Here, they joined Briansky’s father and his family in Ansonville, which at the time had a small Jewish community. In 1939, the family moved to Val d’Or, Quebec and finally to Montreal in 1941. Then in her mid-teens, Rita Briansky was a keen student who nourished a continued interest in art. With the move to Montreal, the Briansky Family struggled financially and was unable to afford the fee for Rita’s high school education. It was the Yiddish poet Ida Massey who found Rita a job so she would be able to pay for her schooling. This encouragement served as the beginning of a valuable friendship, as well as helping foster Briansky’s artistic career. Massey later introduced Rita to Alexander Berkowitz who at the time was giving art classes at the St. Urbain Street ‘Y’. Her training and experience quickly expanded, taking the young artist through Montreal’s Ecole des Beaux-Arts and New York’s Arts Student League. In 1949, Rita married fellow painter, Joseph Prezament.The couple had two children together, Anna and Wendy. Briansky’s work has been shown in solo and group exhibitions both in Canada and internationally. Her body of work is diverse in both theme and subject matter, reflecting her interests in fields such as astronomy and the natural world, while remaining deeply rooted in her own experiences. Following her travels to her birth place and memorial sites in Poland in 1995, Briansky produced the ‘Kaddish series’ as her reflection on the trauma of the Holocaust. Other series have broadly used landscape, portraiture and still lifes as a passionate response to the world around her and that speak fundamentally to the human condition. Briansky has participated in multiple collaborative projects, for example the children's book “On Stage, Please” with dancer/ choreographer Veronica Tennant. Briansky is long-established within Montreal’s art community working and living alongside a tight-knit group of artists. In addition, she has worked as teacher, both of art history and studio arts. Briansky’s artistic practice has won her multiple awards and her work is included in the permanent collections of institutions such as the National Gallery in Ottawa, the Winnipeg Art Gallery and the Montreal Museum of Fine Arts.

Found in 2016 behind some shelves in a Divinity House office, Bishop's University