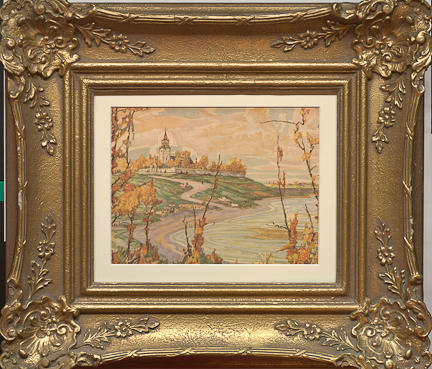 St-Andrew on the Red River

Nicholas Hornyansky was born in Budapest, Hungary in 1896. He studied at the Royal Academy of Fine Arts, Budapest. Later he studied in Vienna, Munich, Amsterdam, Paris and Antwerp.
He is a contributing member of the American Colour Print Society, Philadelphia, and the Southern Print-makers Society of Mt. Airy, Ga.
His work is represented in many museums, notably among which are Budapest Municipal Museum, Antwerp Museum of Fine Arts, Ottawa National Gallery, Royal Ontario Museum, and Central Public Library, New York City.
Mr. Hornyansky has received many rewards for his work. One award was made by the Society of Canadian Painter-Etchers and Engravers when a print of his was selected “The Print of the Year” 1940.
Hornyansky has held one man shows in many cities in Europe, Canada, and the United States. He has contributed to the exhibitions of the Royal Canadian Academy, Ontario Society of Arts, Ottawa National Gallery, Pennsylvania Academy of Fine Arts, California Print-makers, American Academy of Design and the New York World Fair 1939. He died in 1965.