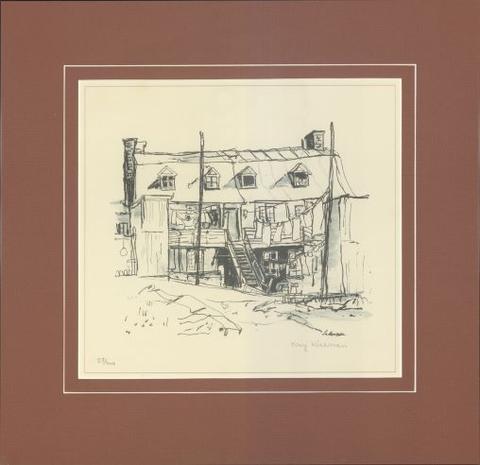 Artist Kay Kinsman was born in Los Angeles, California on 27 June 1909. Kinsman attended private school in Havana, Cuba; Jamaica; and New York City. She then studied at the Parsons School of Applied Arts in Paris, the Montreal Museum of Fine Arts, and the Malvern School of Art in England. Kinsman met Ronald Lewis Kinsman in Paris and was married to him there in 1932. The couple had three children. It was Ronald Kinsman's appointment at IBM that brought the couple to Montreal in 1937 or 1938. The city was Kay Kinsman's home until 1971, when, having been a widow since 1965, she went to England for several years to paint. In 1981, she returned to Quebec, settling in Lennoxville. Since living in Lennoxville, she obtained BAs in two fields from Bishop's University (1983) and an M.A. in medieval history from McGill University. Kinsman specialized in water colours but worked in other media at various times. She illustrated several books and has published three books of her sketches: "Montreal Sketchbook" (1967), "Broadway Sketchbook" (1974), and "Lennoxville Sketchbook/Sur le vif" (1990). Over the years, she participated in several exhibits in England and Canada. In 1989, Bishop's University awarded Kinsman an honorary doctorate. She passed away in August, 1998, at the age of 89.