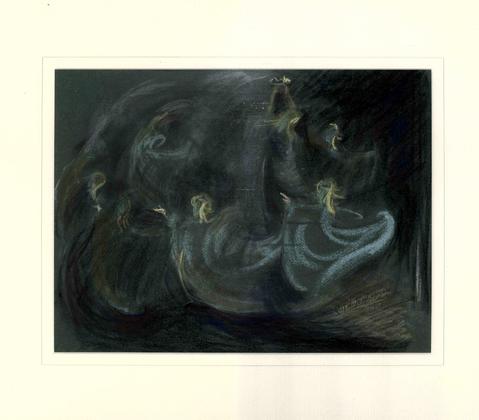 Untitled no. 3 [dancers in circle, figure in center with hat]

One of six pastels from scenes of Verdi's Opera "Macbeth", produced at Glyndebourne Festival in Sussex, England.

Ruth Tomlinson graduated from McGill in 1930 and became a Fellow of the Royal Society of Arts in 1970. She studied painting, first under A. Sheriff Scott (1887–1980) and later under Arthur Lismer (1885-1969). Her works have been exhibited in shows such as those of the Montréal Arts Club, the Edinburgh Festival, and annually from 1956 at the Chelsea Arts Society. Her works can be found in public and private collections primarily in Canada and England.

One of six pastels donated to Bishop's University by the artist's brother, Dr. George H. Tomlinson