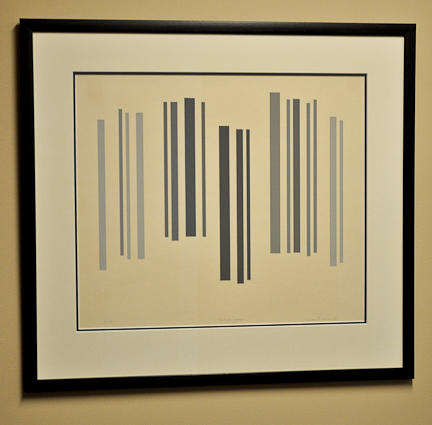 Lawren Phillips Harris was born at Toronto, Ontario in 1910. He was the eldest son of the Canadian artist Lawren Stewart Harris, (1885-1970) who was a founding member of the Group of Seven. Harris (Junior) studied at Toronto's Central Technical School and at the Museum of Fine Arts school Boston, Massachusetts. He worked as a teacher until February 1941 when he enlisted as an officer in the Canadian Armoured Corps. He served in Canada, the United Kingdom and Italy as a war artist.
Harris Junior left the military in June 1946 and became director of the Fine Arts department at Mount Allison University at Sackville, N.B., a position he held for over 30 years. He died in Ottawa in 1994.

Professor Emeritus, Howard Brown, first chairman of the Music Department (1967-1983) gave this work on paper to Bishop's University Art Collection in 1989. Lawren P. Harris and Howard Brown became acquainted while they were both teachers at Mount Allison University in Sackville, New Brunswick.